For the past 12 years, I have been chronicling the blues scene in the San Francisco Bay area.  2012 was no exception.  In 2012, we lost some legendary artists, the number of artists that reside and have passed through the Bay Area was large. Last year, I managed to photograph well over 100 artists.  Some of the artists include:

I've had the opportunity to play this Mission amp out a few times.  I've had it out five times.

The first time, I took it to Aki Kumar's jam.  We used it on several tunes and were planning on doing an A-B test with his Sonny Jr 410.  Unfortunately, there was some grounding issue on stage which effected both amps and made for an electrifying experience.  (It has since been rectified.)

The second time, I took it to a jam.  I brought a camera.  Unfortunately, a sax player sat right in front of the camera.  It didn't affect the sound quality dramatically, but I thought a video of the crotch of a balding, middle aged, overweight sax player wouldn't be interesting to anyone.

The third time out, I took it to another jam.  I forgot the camera.  The fourth time, I loaned it to Aki Kumar for a low volume gig.  The amp was way too loud for that place.  It was on the lowest usable setting.  He had the volume control on his mic way down in this video.

Friday night, I sat in with Steve Freund.  I brought the amp with me.  I had the camera.  I found a good spot to set it up.  I had a hard time keeping the band in the video frame.  This was all that I got with every one on stage.  So far, I am pretty happy with this amp.  I still have a bit of work to do to dial it in a bit where I want it.

There is a lot more volume to be had than where I had the amp and microphone set.  I have noticed that the amp matches up pretty well with most of my microphones, but some do sound better.  Right now, I am using a JT30 with a Shure 99A86 in it.  There is less feedback and it seems to sound better.
Posted by Joe's Blues Blog at 1:10 PM 1 comment:

I recently acquired a used Mission Chicago 32-20 from a forum member on Adam Gussow's Modern Blues Harmonica forum.  I only had a short period of time to mess with it inside the house.  The advertising on the Mission Amps web site is 100% spot on.

It was similar to trying to play a Fender Bassman in the house.  It was way too loud.  I had to turn the bass down a bit and flip the Deep switch to the off position to get this video.  In the video, I was sitting way too close to the amp to avoid feedback.  It's a very toneful little box with quite a few options that alter the tone which I don't think came across in the video.

After messing with it a bit at home, I decided to take it to Aki Kumar's blues jam.  It held it's own quite nicely.  I wish I had been able to get more video, but the battery on my camera suffered a premature death.  I dont believe that it was as loud as Aki's Sonny Jr 410, but it was pretty darn close.  As far as the tone, no one was complaining.  It was fantastic.

It's pretty feedback resistant in fixed bias.  I look forward to playing again.  Possibly as soon as tonight or Monday night.


As many harmonica players know, the instrument starts to wear out the first time that it is placed in your mouth.  If you stick with the instrument, eventually they wear out and one or more reeds will go flat.  Back in the day, when a harmonica cost five or six dollars, a player could afford to toss them out.  Turn the clock ahead twenty five years.  The same harmonica which used to cost five bucks, now costs thirty five dollars or more. They are far too expensive to throw away when one reed goes flat.  Which means that they go into a box and gather dust until you figure out how to fix them or get someone else to do the job.

Recently, I learned of Mark's Harmonica Tune-Up.  For the low price of $10 per reed, Mark will replace a bad reed in a variety of Hohner models including:
He will open the back covers on request for no additional charge on Special 20 and Marine Band models.

Mark's Harmonica Tune-Up is also one of the rare businesses that will work on the
Modular Systems Hohner harmonicas including:
I had a box of about twenty harmonicas with broken reeds.  I went through the pile and eliminated harmonicas that seemed unrepairable.  I stopped by the post office and picked up a small flat rate Priority Mail box.  Seven MS harps fit very nicely in the box.  Shipping the box cost less than $6.  I shipped a postal money order covering the repairs and return postage along with the harmonicas to Mark.

Mark sent me e-mail keeping me informed of the progress of the repairs.  A couple of weeks later, I received a similar box with seven repaired harmonicas.  Not only did he replace the defective reeds, he tuned up the harmonicas.  They all played great.  I was a very happy customer.  For less than $80, I got seven harmonicas that are better than the harmonicas that were shipped out of the Hohner factory.  With the recent price increase in MS reed plates to $47, this makes a great deal of economic sense.

You can reach Mark's Harmonica Tune-Up by e-mail at markprados@aol.com.  You can also reach him via Facebook @ Mark Prados.

Mark Hummel's music career began in the mid 1970's when he was played with local Oakland bluesmen such as Cool Papa, Boogie Jake, Mississippi Johnny Waters and Sonny Lane. In 1980, he formed the Blues Survivors Band.  Around 1991, he started the critically acclaimed Blues Harmonica Blowouts which have played international festivals and have featured some of the legendary giants of the instrument such as: Carey Bell, Billy Branch, James Cotton, Sam Myers, Rod Piazza, Snooky Pryor and Kim Wilson.

In spite of this tremendous success, very little has been written about Mark Hummel throughout his musical career.  The release of "Big Road Blues:12 Bars on I-80" should correct that.  In this self penned book, Mark writes about his formative years as a blues musician around the Oakland scene and his decades of time on the road with some true legends.  Some of the stories are funny, while others are sad enough to break one's heart.

Mark's writing style is almost conversational.  If you've met Mark, quite often it feels like he is in the same room telling his story.  I found it quite difficult to put down and found myself learning quite a bit about Mark Hummel, the artist, business man and person.  Overall, if you are a Blues fan or a harmonica player, you are highly likely to find it a great read and very worthwhile addition to your Blues library.
Posted by Joe's Blues Blog at 8:32 PM No comments:

Last month, I was asked to write a CD review for the Golden Gate Blues Society newsletter.  At first, I was resistant.  I am not a writer.  Eventually, I was coaxed into it.  Here is the review...

“Make It Good” is former Bay Area resident, RJ Mischo’s tenth release and his first for Delta Groove Music.  It’s a “high-octane fueled album” consisting of thirteen original tunes that demonstrate Mischo’s fine songwriting skills.  One thing that remains in common with his previous releases, this CD is a fine collection of old school Blues numbers mixed with some 1950’s-era rock and roll tunes.

On most tracks, he is backed by some of the finest talent out of Austin, Texas including: guitarists Nick Curran and Johnny Moeller, bassist Ronnie James Weber, drummer Wes Starr and pianist Nick Connolly.  On two of the tunes, he is more than adequately backed by drummer Richard Medek, and guitarist Jeremy Johnson from Minneapolis.

The first track, “Trouble Belt”, starts the set with an uptempo number reminiscent of 50’s rock and roll.  It’s a song about a woman in a leopard skin top with that a smile that'll make your heart stop.  “The Frozen Pickle” is a wicked instrumental jam that showcases the fine instrumentalists on this recording.  It starts off as a showcase for RJ’s fabulous harmonica tone followed by a very lush organ solo and a guitar solo that transports the listener back to 1955 before RJ wraps it all up.

The title track, “Make It Good”, provides the listener with some great advice about treating a woman right, not spending all your money and acting like a fool.  It features some very nice guitar work by Jeremy Johnson.  “Papa's St Special” is a crowd pleasing and delightful country blues romp that RJ has been performing during his past couple tours through the Bay Area.  The studio version is no exception.

“Minnesota Woman” is a classic Rice Miller-influenced number bragging about going back home to the woman from Minnesota that he followed from California to Arkansas.  “Up To The Brim” is an instrumental that pays tribute to the legendary John Brim.  It sounds like it came straight out of the Chess Studios in Chicago back in 1953.

“The Biscuit is Back” is an uptempo Rice Miller-influenced trip to down to Helena Arkansas where RJ proclaims his thanks for the return of the King Biscuit Blues Festival in 2011. “Elevator Juice” is another fine instrumental showcasing his fine amplified harmonica tone that is second to none and some fine guitar work by Johnny Moeller.  “All Over Again” paints an interesting tale about the repetitive nature of the partying lifestyle.

Closing the CD is “Arumbula - Part II”.  (“Arumbula - Part I” occurs earlier in the set.)  This is a crazy instrumental that’s like a tapestry featuring some great chromatic harmonica mixed with some fine organ work by Nick Connolly that floats on top of a great jungle beat groove.

RJ’s debut release on Delta Groove is a wonderful collection of songs exhibiting solid musicianship and songwriting.  “Make It Good” would be a welcome addition to any collection of fine Blues music.
Posted by Joe's Blues Blog at 9:41 PM No comments:

A couple of months ago, I decided to pick up a Lone Wolf Harp Octave pedal after reading a great deal about it on the Internet.  I purchased this pedal and an AC adapter directly from Lone Wolf.

The pedal is advertised to deliver a "raspy/crunchy distortion that can be mild or intense, according to the settings chosen. This pedal is best when using the pucker, lip block and tongue block techniques. If you've ever wanted your big amp to sound like a nasty little vintage Champ or Princeton, this is the pedal that'll do it."

Let's give it a try with a tweed Champ...

It sounds like a Champ, but the volume is boosted a bit and a little more distorted.  This may have been a poor amp choice.  Let's try it with an amp that's a bit cleaner.  A Harpgear Double Trouble...

The volume boost is there again.  This time the distortion is a bit more noticeable.
I've had the opportunity to play a couple of gigs with the Double Trouble and the pedal.  I also found that the advertising claim of cutting feedback is true.  Overall, I've been very happy with this pedal.
Posted by Joe's Blues Blog at 8:40 PM No comments: 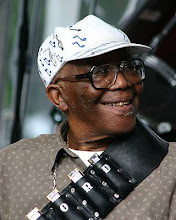